We Stand with Planned Parenthood 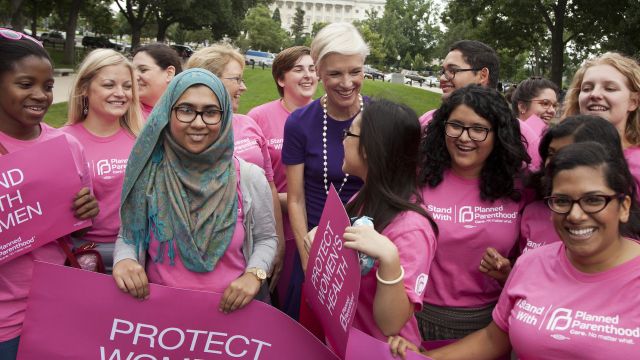 The last several months have seen women’s right to abortion access under attack yet again. This time, it is a return to the strategy of attacking women’s right to choose by attempting to discredit and defund Planned Parenthood. In reality, this is an attack on poor and working women and their access to abortion and a variety of preventative health care services.

The most recent controversy around Planned Parenthood started with the release of several misleadingly edited videos by the anti-choice group (with a similarly misleading name) Center for Medical Progress. The videos seemed to show Planned Parenthood employees agreeing to sell fetal tissues for profit. This was spun up in the media as the sale of baby organs and parts. The full-length videos show doctors and employees repeatedly saying that Planned Parenthood does NOT sell tissues and does not make a profit from the tissues that are used for research. It is important to note that members of the Center for Medical Progress have been previously involved with Live Action, a group so thoroughly discredited in the media that it can no longer function as a legitimate organization outside of it’s own anti-choice environment.

The tactic used by the Center for Medical Progress to release “undercover” footage was also used in a very similar way by Live Action in 2011, when they edited interviews with Planned Parenthood to imply that the organization helps to facilitate sex-trafficking. Their tactic is part of a smear campaign to create a media storm to make people falsely associate Planned Parenthood with selling organs or promoting sex-trafficking. Even once the undeniable truth is out and the falsity of these accusations are proven, the impression has been made. This is why it is critical for all of us to do what we can to counter these lies at every turn.

Not surprisingly, the outrageous accusations have been found to be lies. Through six state and one federal investigation, no evidence has been found to support the allegations.

This campaign which added gasoline to the fundamentalist fire, like all anti-choice campaigns, is one of smoke and mirrors. The right-wing conservatives are hiding behind the stigmatized word “abortion” in order to defund an organization in which abortion totals 3% of the services rendered. The anti-choicers who demand the defunding of Planned Parenthood fail to mention that the Hyde Amendment already bars federal funds for abortion services. In some states, the attempt is to remove Planned Parenthood from the list of providers covered by Medicaid. The Democratic Party whispers to outraged women that it is on our side, but it continues to do nothing. Ninety percent of the services provided by Planned Parenthood are cervical screenings, breast exams, contraception and STI testing. And of course, the vast majority of the people they serve are the young, the poor and women of color.

This point was repeatedly brought up during the Congressional hearing on September 29. This hearing was a male-dominated verbal assault with the goal of finding reason to withdraw all federal funding for Planned Parenthood. Of the $450 million that Planned Parenthood receives in federal funding each year, almost $400 million are reimbursements for services covered by Medicaid. When some states have attempted to defund Planned Parenthood at the state-level, it is this Medicaid issue that has prevented them from doing so. Planned Parenthood serves 2.5 million people in the United States every year, and, according to the General Accounting Office as of 2012, 79 percent of those live at 150 percent of the federal poverty level or lower. It is impossible to deny that attacks against Planned Parenthood are attacks especially on the ability of poor and working women to access preventative and reproductive care.

These attacks are minimally covered by the media and minimally investigated, beyond being determined “arson.” They are serious attacks that need attention. The arson and bombing of clinics and the murder of healthcare providers is all too familiar. Next time, it may not be gasoline dumped through broken windows, but doctors and patients targeted. It has happened before, and we have to know that it can happen again.

We cannot forget what is at stake here: women’s health. It is imperative to our well-being and survival. It is a need and a right for women to have access to contraceptives, cancer screenings, STI treatment, prenatal care and abortion. It is critical that healthcare be affordable and accessible for everyone. The fact that these basic needs are again under attack by politicians and anti-women terrorists highlights the absolute imperative to speak up. Every right we have gained has come because we have struggled long and hard for it. If we do not rise to the defense of what we have gained, we stand to lose it. So, raise your voice and be part of the struggle. This is not the time to idly sit by the sidelines.