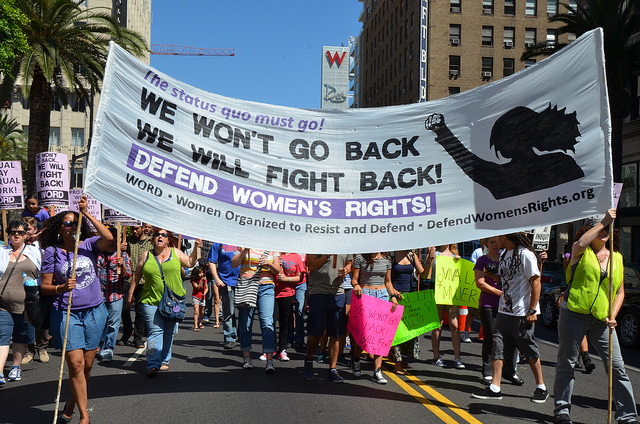 On the first day of the new Congress, a bill proposing a nationwide draconian restriction on the right to abortion was re-introduced. With all the current issues faced by working people in this country, the priority for House Representatives Trent Franks (R—AZ) and Marsha Blackburn (R—TN) was to attack and restrict women’s rights. They submitted HR 36, also known as the “Pain Capable Unborn Child Protection Act,” which would ban all abortions after 20 weeks (with particular exceptions for rape, incest and physical harm to the woman).

Support for this bill is based on the faulty premise that fetuses can feel pain at this point of development. Rep. Franks goes so far as comparing abortion to torture, and claiming that many of the fetuses that are aborted at these later stages are capable of surviving outside of the womb. This claim is not true.

The truth is that this bill intentionally misinterprets science and presents a package of lies to pull on heartstrings and manipulate public sentiment. It takes a direct shot at women’s rights—primarily the right to an abortion as decided in Roe v Wade.

Let’s look at the truth behind HR 36.

The 1973 decision handed down by the U.S. Supreme Court in Roe v. Wade held that abortion must be legal for women up to the point of “viability.” This is marked by the point in which the fetus is capable of prolonged life outside the womb, which occurs between the 24th and 28th weeks of pregnancy. HR 36 is a direct challenge to the right of women to access abortion up to this point, and bills like it already have been struck down at the state level due as unconstitutional (including in Rep. Trent Franks’ own state of Arizona).

The idea of pain being felt by 20 weeks is based on intentionally misconstrued science. What is commonly promoted as proof of “pain capability” is the development of the pathways within the brain that perceive pain and other sensory information. However, according to the UCSF Bixby Center for Global Reproductive Health, just because this “sensory wiring” is present within the brain does not actually mean that it is functional. Based on the best available scientific evidence, pain is not capable of being experienced by a fetus until at least the third trimester, and likely not until birth. (See “Fact Sheet: Fetal Pain, Analgesia, and Anesthesia in the Context of Abortion” from Advancing New Standards in Reproductive Health (ANSIRH), a collaborative research group and think tank at the University of California, San Francisco (UCSF)’s Bixby Center for Global Reproductive Health, Issue Brief #1, June 2010.)

This bill isn’t about “fetal pain.” It is about finding more and more ways to chip away at a woman’s right to control her own body. It is about trying to take away rights for which women fought for decades – and won.

The truth is that this bill would outlaw the 15,000-18,000 abortions at 20 weeks or later that occur annually, or about 1-1.5 percent of the total number of abortions performed in the United States. There are many reasons that women choose to have abortions during this time of their pregnancy. While women have the right to decide what is best for them and their families, studies have shown that many women who have abortions later in their terms wanted to have done so sooner, but did not have the means to access services – making this a right in name only. In addition to the struggle to overcome the many restrictions that women are forced to jump through in this country to access this right, many working women do not have the hundreds of dollars required for an abortion in the first weeks. By the time that they are able to pull together the $500 or $600 required, the cost has doubled or tripled, pushing them to have to return even later.

What women really need is to have contraception and abortion available for free to all, and to have comprehensive sex education.

While these politicians talk patronizingly about how they are doing “what is best” for women with each new restriction and hurdle, all they do is push poor and working women into increasingly difficult and unsafe positions. At the same time that access to reproductive care is under attack, social services are slashed.

Some will say that the lesson here is that women and their allies must vote in every election. WORD (Women Organized to Resist and Defend) says that we should take the lesson of our foremothers: When we act together, we are strong.

It was the militant struggle of women that led to the famous Roe v. Wade decision. It was the united raised voices that brought awareness and change in the struggles against domestic violence and rape, against racism, and for LGBTQ and workplace rights. Women have been leaders in the struggles for justice and equality for more than 100 years, and we continue to be so today. We can see the impact that we have had in these last years as we have worked to beat back anti-choice legislation, spoke out together to combat the daily violence against and harassment of women, and led marches in our communities against racism and police terror.

The path to defeating these attacks is through uniting and fighting together. It’s time to organize and fight back!