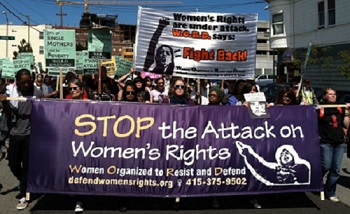 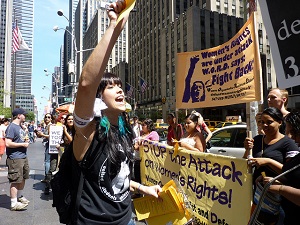 But what must never be forgotten is that we are not bystanders in history. Women have been important in every struggle for justice. Women have laid their freedom and their lives on the line fighting for workplace rights and against police brutality and racism. Women have risked imprisonment fighting for legal abortion and contraception and faced possible deportation fighting racist anti-immigrant policies. Instead of just looking forward to the day we feel safe to walk down the street, when our bodies are not objectified and commodified, we organize and speak out now against street harassment and rape culture. We struggle for a day when we are not paid less just because of our gender or more likely to live in poverty because of it. 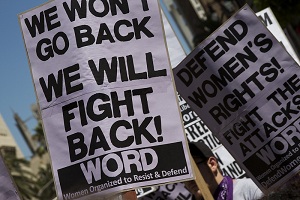 This month in particular is also noteworthy since this March the United States Supreme Court will be reviewing the Texas law that has already been responsible for forcing closed half of the state’s abortion clinics in the last year and a half. The outcome of this case alone would have immediate impact on other states in the South which are facing similar bills, with the effects rippling nationwide. Abortion is technically legal, but laws like this will put access to this right out of the hands of millions of women. It is absolutely imperative that we recognize the importance of our voices. Court decisions have never been handed down by benevolent justices; the strength of the movement has had a profound influence in gaining the rights we have won.

Equality is possible. But only if we organize, mobilize and make it happen. Our strength and determination when we come together is a power like no other. It is the power of the people. This carries the ability to change the world.

We continue fighting to keep the gains we have made and mobilizing to demand full equality. This is the way we honor International Women’s Day: as a celebration of struggle and a day to look ahead towards continuing to build the struggle for women’s equality.