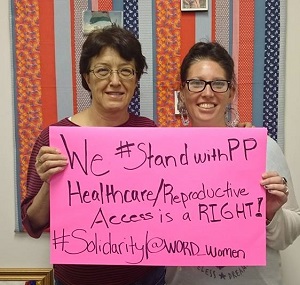 In the face of these attacks and the ongoing effort to legislate away women’s right to abortion access, it is imperative that women and men stand up to show their support right now. Right-wing bigots are using fear-mongering tactics to take away women’s right to choose and the right to affordable healthcare. The rightwing seeks to blame the most vulnerable poor population to hide the reality that they would rather take the money for themselves than provide poor women and men with healthcare and resources. Women won the right to choose with a unified mass movement of women and men in the streets. WORD stands in solidarity with Planned Parenthood and seeks to build a mass movement to defend our rights. Join our campaign and submit a picture of why you defend Planned Parenthood at info@defendwomensrights.org.

Submit A Picture of Why You Defend Planned Parenthood