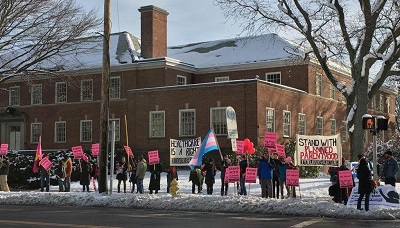 The antagonizers occupy areas where they can block the entrance and exits, where they heckle patients and workers with anti-abortion and racist signs. The initially small coalition has had success in driving them away from the driveway. After these successes and increased interest from people who had heard about the support rallies, organizers decided it was time to organize a larger, public event to demonstrate solidarity for patients and workers of Planned Parenthood, as well as defend the right to healthcare.

On the morning of February 6, 2016, people from all over the state gathered in front of New Haven’s Planned Parenthood in a display of overwhelming positivity. Over 65 people showed up to flood out the anti-healthcare group. Members of the local FUUS, as well as some high school students and New Haven locals, joined in a display of pink bandanas, pink flags, pride and trans flags, and pink signs that read “We won’t go back!” as well as banners that read “Healthcare is a Right!” and “Stand With Planned Parenthood.” Many community members brought their children to the event. A large number of people attending were local residents who were sick of seeing the hateful display outside their windows.

In the face of increasing attacks on reproductive rights, it is an imperative responsibility to create a safe area for patients, workers, neighbors, and even passers-by, as well as for organizers and community members who want to participate in these events. While the bigots repeatedly attempted to attract attention or otherwise upset the support rally, participants and the community stood firm and did not engage. Over the course of the morning, residents who walked past or lived in the surrounding neighborhoods took time to thank the crowd for breaking the usual sight of obscene signs and aggressive behaviors, and some even took up signs and joined the ranks of the rally. Many people commented that they felt more at ease coming through the area in the mornings, and the pink display attracted multitudes of commuters driving past to honk in support. A number Planned Parenthood volunteers stopped by the action to thank the protesters.

While Connecticut was recently rated an “A-” on NARAL’s “Who Decides: The Status of Women’s Reproductive Rights in the United States” (25th Edition, January 2016) -- one of only 6 states in the “A” range -- and there are no serious anti-choice measures in the legislature, the February 6 solidarity action served the important purpose of continuing to build the movement that won the right to choose in the first place. People not only stood with Planned Parenthood in New Haven, but with every person across the country whose rights to healthcare services are under attack.

Cassandra Cuddy, a WORD organizer who helped lead the actions, said: “Poverty is high in New Haven, and people have the right to access healthcare without being harassed. I want the neighborhood, patients and staff to know that we support Planned Parenthood and won't let these fascists intimidate us. Their tactic is entirely antagonistic, so I show up every week to show them I'm not afraid. Others should join so that we send the message that as a community we don't support the anti-choice bigots being there harassing and antagonizing patients and staff.” Silas Levine, an attorney who was involved in helping to organize the event, commented: “I got involved to show support for the staff and patients of Planned Parenthood, and also the community members who rely on the clinic to be part of New Haven’s healthcare landscape as a potential resource to fall back on. In Connecticut, it seems like we have largely won the fight for access to birth control and reproductive healthcare at the policy level, so opponents of reproductive freedom rely on scare tactics addressed toward individual patients coming into the clinic to impose their viewpoint. … The counter-protest, and the neighborhood’s reaction to it, sends a clear message: that our community stands with Planned Parenthood, and reproductive rights are here to stay.”

Patrick Comerford, a Planned Parenthood worker and community organizer, came out to thank the protesters for standing up for the clinic. WORD organizer IV Staklo, who was a key organizer of the event, thanked him in return, saying: “This has been a fantastic action. What makes the people who showed up today special is the fact that they’re not coming out here for fun, or because they’re doing something cool or edgy. When we were preparing for this event, we all shared so many stories about how much this clinic has done for us. Someone came to one of our prep sessions to make a sign that said ‘Planned Parenthood Saved My Life.’ We’re all here because this affects us.” Comerford replied: “We appreciate and thank you guys from coming out here to support us, and we realize that this is so much bigger than just Planned Parenthood. It’s about a much bigger movement.”

The movement Patrick is talking about is growing across the country. Communities with and without reproductive health resources alike are standing up to defend clinics against bigots and demand adequate healthcare. WORD and our allies believe that only through organized fightback can communities win against the well-funded and protected right-wing hate and attacks springing up across the country. It is fitting that this fightback is surging around the anniversary of Roe v. Wade, as that crucial ruling was a product of an organized movement of pro-choice activists in the streets. Women, LGBTQ people, people of color, poor and working people, and all communities that rely on reproductive health clinics need to continue standing together in the fight to defend our rights and resources. As the enthusiasm and commitment of the community shows, this action is just one of many more. The movement grows weekly and already dozens of community members have pledged to take part in support rallies every weekend.

New Haven has made it clear: anti-choice bigots are not welcome in our city. Healthcare is a right! We stand with Planned Parenthood!