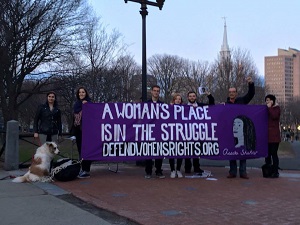 A 12-foot banner quoting Assata Shakur, as well as four additional banners, spanned the grassy sidewalk area in front of Planned Parenthood declaring “A woman’s place is in the struggle” “Healthcare is a right!” “Stop violence against women everywhere!” “Stand with Planned Parenthood” and “Defend Women’s Rights”. Supporters held signs that read “Honk for Healthcare!” “We won’t go back!” and “.Stand with Planned Parenthood” Additionally, a local mobile coffee truck parked infront to take up parking spaces that would have otherwise been occupied by antagonizers and their bigoted signs, while serving hot beverages to supporters for the duration of the action. Pink bandanas were passed out to heighten the pro-PP visibility, and pink glittery fairy wings were handed out to attending children who wore them enthusiastically.

Supporters from previous Saturday initiatives as well as a large number of new faces joined ranks to demonstrate positivity in the face of antagonism and hate. In contrast to a similar New Haven action held in February that coincided with the Roe vs. Wade anniversary, the aggressors’ attempts to thwart the atmosphere of positivity were much more intrusive. Supporters of Planned Parenthood were met with intimidation ranging from attempted provocation to filming any conceived slight, to taunting supporters over their identity. While the anti-choice bigots attempted to compensate for their inefficient planning and total lack of community favor, community members proved their tenacity in standing their ground despite instigations. IV, a WORD organizer, said, “This action is one of many across the country that have occurred in the spirit of IWWD this year. It shows that people in communities nationwide are fully cognizant of the real threat posed by the fascism of Trump and his followers, as well as the violent right-wing harassers who try to terrorize people going into clinics for care. In New Haven, we were able to drive away the harassers from both entrances to the clinic. In Chicago, brave activists shut down Trump. All of our struggles are interconnected. As long as there's a movement in the streets, we can keep bigots at bay. It is inspiring to me as a trans organizer that actions for gender equality and reproductive health, both in New Haven and nationally, have had trans community members - especially trans women - at their forefronts. Clinic access and attacks on reproductive rights are issues that affect all people, and it was empowering that people of all backgrounds and genders stood together to defend PP against hate on Saturday.”

When aggressors attempted to yell extremist religious rhetoric, the community demonstrators proudly declared “Women’s rights!” and blew whistles energetically to drown out the provocations, effectively driving aggressors from key points of visibility. The most moving display of solidarity occurred when the bigots attempted to take the most critical point of visibility. Acting on disciplined instinct, a long line of demonstrators quickly and strategically positioned themselves along the grass in a display of empowering signs and pink attire to block the final attempt to take the front line of the main road. Flags with smiley faces, as well as the trans flag and pride flag were wielded proudly and were used to cover up the insensitive and distasteful images held by antagonizers.

Planned Parenthood worker and community organizer Patrick Comerford applauded the success of the action saying, "As we see an increase in hateful rhetoric against marginalized people, including smear campaigns against abortion providers, racist and xenophobic attacks in the presidential campaign, and increased institutional violence aimed at our communities, we are forced to confront an environment where language translates into real acts of violence. What we saw on Saturday was a showing of love and support for our providers, patients, and staff. As people committed to reproductive freedom, where every person has the opportunity to live their lives free of violence, we have an obligation to speak out and reject this kind of vitriol – to live into the values we want reflected in the world. These kinds of supportive actions are a beautiful example of how that speaking out can take shape."

While confrontation from the anti-choice bigots continues to resurge all across the country, actions like this prove that they will not deter supporters from standing their ground. If anything, the peoples’ conviction to fight for healthcare and equality for all is only reaffirmed. Where antagonizers bring manipulation, organizers and the community step up to counter them. Where bigots bring hate, organizers and communities bring an empowering message to the people. Wherever the aggressors show up to instigate, we will be there to shut them down. New Haven has made it clear: in the spirit of International Working Women’s Day, we will continue to defend healthcare rights!