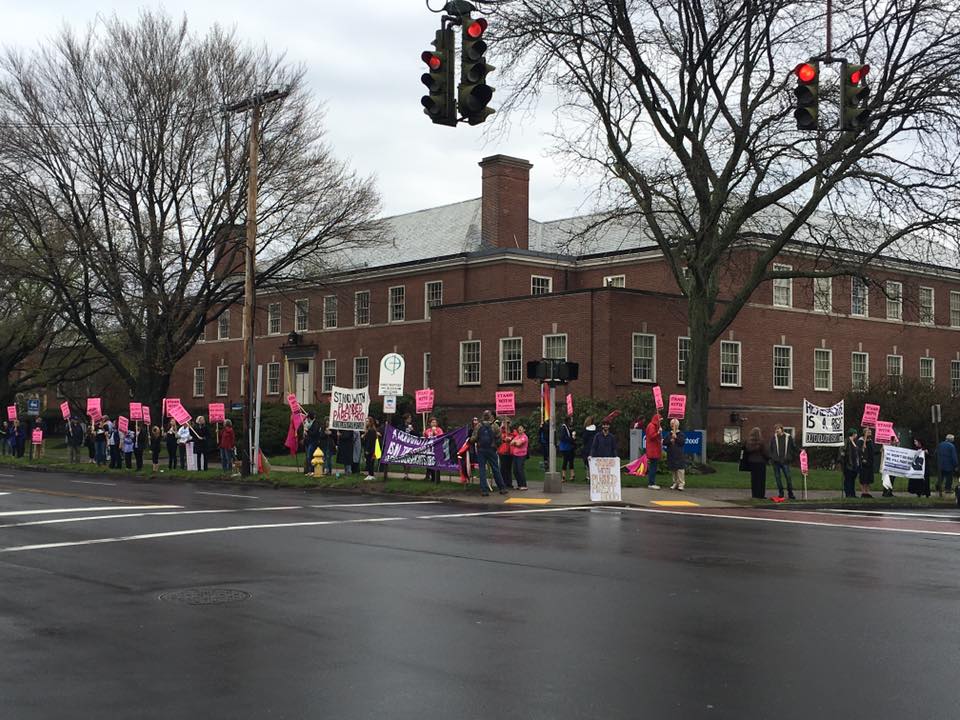 On April 23, a disgusting series of actions were initiated by a misogynist anti-choice umbrella group targeting Planned Parenthood clinics across the country. One of the many clinics targeted was the Planned Parenthood of Southern New England in New Haven, Ct.

Under the leadership of WORD and the local community, people from across the state mobilized for an action of love and support for the clinic to counter the hate. Over 80 people lined the busy Whitney Avenue in front of the clinic, holding pink flags, trans and pride flags and banners and signs reading “Healthcare is a Right!” and “Stand with Planned Parenthood!” The demonstration was attended by a large number of students, including a strong contingent from the Yale Divinity School, as well as members of the faith community in Connecticut and activists from a wide variety of fronts. Despite the threats, fearmongering and deep pockets of many anti-abortion groups involved, the clinic support demonstration outnumbered the harassers by far -- only about a dozen anti-choicers showed up to their own action.

Steve Hall, a community member and father who was one of the first people to stand up to the anti-abortion hate on a weekly basis, said he is disgusted by the fact that bigots come in from affluent communities to harass poor people trying to gain access to healthcare at the clinic. “This is the only healthcare some people can afford. At the end of the day, it’s about denying reproductive rights,” he said.

WORD organizer and trans community activist IV Staklo said: “This beautiful show of force in defense of Planned Parenthood and reproductive rights as a whole is a huge testament to where the people of our city stand. Planned Parenthood serves people of all walks of life, all backgrounds and all genders, regardless of what their needs may be. We stand with Planned Parenthood because Planned Parenthood is often the only place that stands with us. So many of the people at the action are or were patients at the clinic. Standing up to this bigotry, harassment and hate is a personal thing for us as well as symbolic of a larger national movement. Access to healthcare, including abortion, is a basic right, and New Haven says firmly that no amount of threats will let us give that up.”

With a huge amount of support and gratitude from workers, patients and community members, WORD is continuing to build weekly clinic defense actions in Connecticut. We encourage anyone who wants to get involved in standing up for Planned Parenthood to contact us!